Promotes the development of domestic energy sources, and initiates a review of the Clean Power Plan.

Get updates related to this development

This Executive Order promotes the exploration and production of fossil fuels on domestic lands by removing or modifying current regulations, including reviewing the Clean Power Plan implemented by the previous administration and other agency rules, removing the moratorium on leasing federal lands for coal, and streamlining the approval process for oil and gas production, including the use hydraulic fracturing (fracking) and similar techniques.

The purpose of the order is to instigate economic growth by increasing the development of domestic energy resources, improving national security by increasing energy independence, and limiting the government intervention when addressing clean air, clean water and environmental concerns by reducing the role of federal agencies in favor of regulation directly by Congress and the States.

The Order has six parts: first, it instructs the heads of agencies to review all rules and regulations which may burden the siting, permitting, production, utilization, transmission, or delivery of energy resources, with a specific focus on coal, oil, natural gas, and nuclear energy.

Second, the order revokes four executive orders and memorandums and three reports from the second term of the previous administration with a focus on climate change and greenhouse gas emissions. The rescinded regulations are:

Third, the order initiates a review of the Clean Power Plan and its related rules, specifically rules related to carbon and greenhouse gas emissions from electric utility generating units. The Administrator of the EPA is tasked with reviewing the following rules and taking actions to suspend, revoke or revise the rules:

Fourth, the order disbands the International Working Group on Social Cost of Greenhouse Gases, and withdraws the group’s methods for producing cost-benefit analysis, reverting to protocol established in 2003. This will serve to eliminate the consideration of livelihood costs caused by carbon emissions on cost-benefit analysis for future projects.

Fifth, the order instructs the Secretary of the Interior to withdraw the moratorium on leasing federal lands for coal production that was put in effect January 15, 2016.

Finally, the Secretary of the Interior is instructed to review four rules on the allowed procedures for oil and gas extraction. The Secretary is tasked with suspending, revoking or revising the following rules:

The Order requires that a report of recommendations be submitted to the Office of Management and Budget (OMB) within 180 days (on or before September 24, 2017).

The Order is directly related to scaling back or eliminating the Clean Power Plan (CPP).

Proposed by the EPA under the Obama administration in 2015, the CPP presents a pathway to limit U.S. greenhouse gas emissions by implementing state standards on carbon dioxide emissions from power plants. Under the CPP, states would be permitted to propose their own means to meet these standards, although the EPA would create plans for any states who chose not to submit one of their own.

Critics of the plan claimed that the EPA was overstepping its bounds and expanding beyond the scope of the Clean Air Act. Proponents celebrated the plan’s environmental and public health benefits.

America’s domestic coal production peaked in 2007, and has since decreased significantly. The decrease has been attributed to a decrease in demand, as power plants shift away from coal usage and towards natural gas. The Appalachian coal producing region has seen production decline by over 50% since 2008, while Western and Interior coal producing regions have been less affected. Natural gas production has increased significantly over the past decade (in large part due to technological advances related to hydraulic fracturing) after remaining steady for 30 years, but 2016 saw a slight dip in production from the 2015 peak.

Crude oil production in the U.S. had declined steadily from 1970 to 2008, when production reached its lowest point since World War II. Since 2008, new drilling technologies have resulted in a rapid increase in production (especially in Texas and North Dakota), which pushed U.S. crude oil production nearly to its 1970 peak in 2015, before regressing slightly in 2016.

Fossil fuels (coal, oil, natural gas and other derivatives) provide energy through the process of combustion – in this process, fossil fuels are burned to produce electricity. These fuels are considered non-renewable, since the timeframe required for them to be replenished through geological processes is significantly longer than the rate at which they are being extracted.

The primary concerns for fossil fuel use are the functionally finite amount and the emission of carbon and other greenhouse gasses when these fuels are burned to generate energy. Coal is used predominantly for electricity generation and petroleum predominantly in the transportation sector, while natural gas is used rather evenly across industrial, residential and electricity generation needs. 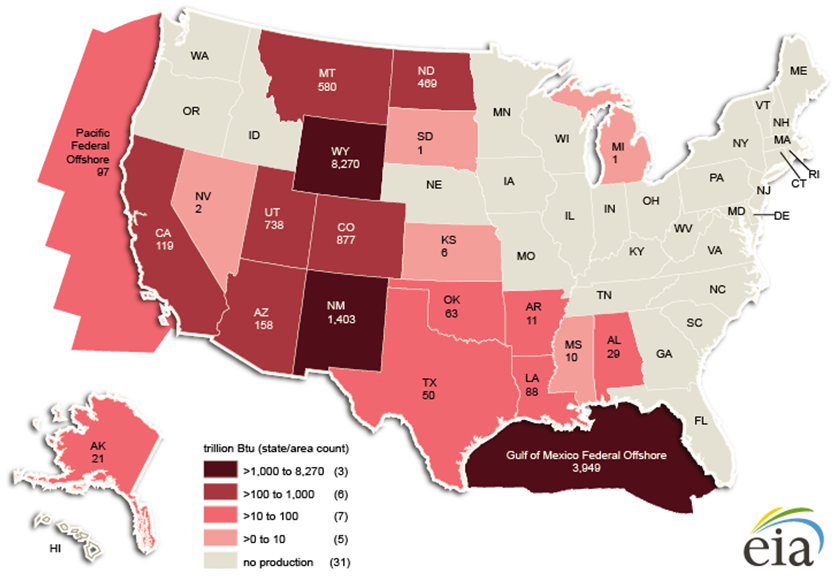 Map of fossil fuel production on federal and Tribal lands

Regions of the United States that were formerly reliant on domestic coal production have seen an increasingly steep decline in production since 2007, leading to widespread unemployment, declining school systems, and poor health outcomes. The coal industry is expected to rebound slightly in 2017 as the price of natural gas is forecasted to rise, but the construction of more natural gas power plants that will come onto the grid in 2018 may send coal production into a second decline.

In June, EPA director Scott Pruitt claimed that the coal industry had added 50,000 jobs in the past six months; however, Bureau of Labor Statistics data put that number at only 1,300. The vast difference in these numbers comes from inconsistent definitions of coal sector jobs, with larger numbers including general miners, loggers, electricians, surveyors, truck drivers, mechanics, and other supporting jobs which may be impacted in downstream industries. The wide variation between state and federal employment data makes it difficult to determine the precise impact of coal production on the economy.

A majority of relevant experts also conclude that changes in the climate are due in significant part to increases in carbon emissions. During combustion, hydrocarbon based fossil fuels react with oxygen, resulting in the emission of carbon dioxide into the atmosphere. It is estimated that 71% of man-made carbon dioxide emissions are the result of burning fossil fuels.

Increasing amounts of carbon in the atmosphere also acidifies the world’s oceans, a major cause for the steep decline of coral reefs globally. Increased greenhouse gasses in the atmosphere are also believed to increase storms and create wider seasonal variability in rainfall, leading to humanitarian issues of disaster relief, sudden flooding, and prolonged drought. Business as usual models project that these effects will amplify exponentially within the next thirty years, suggesting an immediate need for adjustments in emissions policy.

This order is the first executive order issued by President Donald J. Trump with relevance to the energy sector in the United States, and represents a campaign promise to rescind or revise the majority of environmental regulations placed on energy production by the Obama administration.

This order also represents a first effort to fulfill a campaign promise to reinvigorate the economies of rural and semi-rural regions of the country that have historically relied on employment in large-scale energy production.

Endorsements of the order have celebrated the removal of regulatory strains, an increase in domestic energy jobs and increased national security due to energy independence. Opposition has argued that the order will have little economic benefit, increases the risk of significant environmental damage, furthers American dependence on a limited supply of fossil fuels, and endangers public health from air and water pollution.

Legislation in Opposition to this Executive Order:

Legislation in Support of this Executive Order:

The order also places the following specific legislation under review, with the intent to modify or revoke:

This work is licensed under a Creative Commons Attribution-ShareAlike 4.0 International License. Please distribute widely but give credit to Duke SciPol, linking back to this page if possible.
Related

Department of Energy – The President and I agree on a fundamental tenet: rather than preaching about clean energy, this administration will act on it.

Utility Dive – A day after it delayed oral arguments over the EPA's Mercury and Air Toxics Standards (MATS), the Circuit Court handed the Trump administration another significant victory.

Replaces Obama-era regulation of GHGs from the power sector with modest efficiency improvement mandate that will curb GHG emissions by 1.5% below current projected levels by 2030.

Affirms that existing PJM capacity market bidding rules must be changed to adequately address subsidized resources, while rejecting two PJM proposals to do so, and suggesting framework around which PJM must adopt new rules.

Reuters – California and 18 other states said they would sue to stop a Trump administration proposal to weaken Obama-era federal fuel efficiency standards.

The Washington Post – President Trump intends to nominate Kelvin Droegemeier, an expert in extreme weather from the University of Oklahoma, as his top science and technology adviser.

The Washington Post – Environmentalists called the decision a major blow against the 303-mile Mountain Valley Pipeline, which is being built from West Virginia though the rugged terrain of far Southwest Virginia.

The House Committee on Natural Resources will hold a hearing in Roosevelt, Utah, titled "Energy and Education – What’s the Connection?" The hearing will review avenues to encourage greater development of federal lands and provide much needed resources for States and, in turn, education services.

Hearing: Nomination of Dr. Kelvin Droegemeier to be the Director of the Office of Science and Technology Policy

The Senate Committee on Commerce, Science, and Transportation will hold a nomination hearing to consider Dr. Kelvin Droegemeier to be the Director of the Office of Science and Technology Policy.

The Senate Committee on the Judiciary, Subcommittee on Crime and Terrorism, will hold a hearing titled "Cyber Threats to Our Nation’s Critical Infrastructure."

All Opportunities to Engage

Connect with us
Brought to you by