Get updates related to this development

Hydrology is the branch of science concerned with earth’s water. The field of hydrology encompasses the occurrence, distribution, movement and properties of the waters of the earth and their relationship with the environment. The hydrologic cycle – commonly referred to as the water cycle – is the continual, repeated process by which water moves from the earth's surface (including the oceans) to the atmosphere and back to the land and oceans.

There are many ways for earth’s water to make this journey. To better understand these processes, we can think of them in three simple steps: 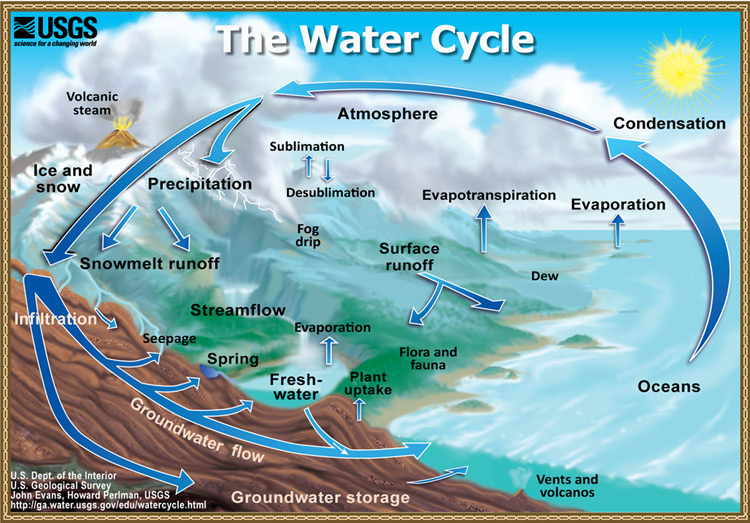 In the first step, water moves into the atmosphere from aquatic bodies such as lakes, rivers, streams, and oceans. Water is also carried into the atmosphere through the transpiration of plants, the evaporation of groundwater sources, and the sublimation of snow and ice on mountain tops.

In the second step, water travels in the atmosphere as a vapor or through clouds – which are a combination of air, water, and tiny particles. This step is critical, because it moves fresh water from one location on earth to another.

In the third step, water is deposited back on earth in the form of precipitation (rain, ice, or snow). Some atmospheric water can also land on earth’s surface – usually mountain tops – by a process called desublimation – this means that the water has transformed from a gas directly to a solid.

All of this deposited water is absorbed by soil and transported along streams, in rivers, and through ground water flows. It is in this final step that water provides the basis for much of life on earth. By flowing through streams, rivers, and ground water, it is able to fuel the growth of plant life, and provide drinkable water to humans and animals on land.

This work is licensed under a Creative Commons Attribution-ShareAlike 4.0 International License. Please distribute widely but give credit to Duke SciPol, linking back to this page if possible.

Replaces Obama-era regulation of GHGs from the power sector with modest efficiency improvement mandate that will curb GHG emissions by 1.5% below current projected levels by 2030.

Affirms that existing PJM capacity market bidding rules must be changed to adequately address subsidized resources, while rejecting two PJM proposals to do so, and suggesting framework around which PJM must adopt new rules.

Reuters – California and 18 other states said they would sue to stop a Trump administration proposal to weaken Obama-era federal fuel efficiency standards.

The Washington Post – President Trump intends to nominate Kelvin Droegemeier, an expert in extreme weather from the University of Oklahoma, as his top science and technology adviser.

The Washington Post – Environmentalists called the decision a major blow against the 303-mile Mountain Valley Pipeline, which is being built from West Virginia though the rugged terrain of far Southwest Virginia.

The House Committee on Natural Resources will hold a hearing in Roosevelt, Utah, titled "Energy and Education – What’s the Connection?" The hearing will review avenues to encourage greater development of federal lands and provide much needed resources for States and, in turn, education services.

Hearing: Nomination of Dr. Kelvin Droegemeier to be the Director of the Office of Science and Technology Policy

The Senate Committee on Commerce, Science, and Transportation will hold a nomination hearing to consider Dr. Kelvin Droegemeier to be the Director of the Office of Science and Technology Policy.

The Senate Committee on the Judiciary, Subcommittee on Crime and Terrorism, will hold a hearing titled "Cyber Threats to Our Nation’s Critical Infrastructure."

All Opportunities to Engage

Connect with us
Brought to you by